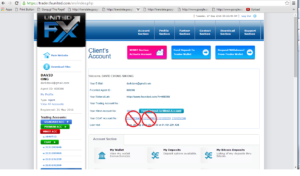 So I decided, enough is enough. I’m taking my money out and I’m running!

So I withdrew my 20k parked in my 2 CGATE accounts and sure enough it was in “Pending”. Which is fine, in this instance it took too little time and I’ll explain why.

My upline Michael then suggested that I send him my profits via something called “network transfer” which means I can send my money to other investors in FXUnited and he has his own way of getting my profits to my bank (another mystery – I wonder how!).

Ok great! I figured, I know him personally so I know he wouldn’t lie about something like this. So I sent an email to support asking them to “cancel my capital withdrawal”

Now they replied to me and said they would do so, but 3 days later the capital was withdrawn and a few days later support emailed me back saying that it was too late! That the money was already withdrawn.

So now we see another kind of delay in their system. The process to cancel a withdrawal of capital took longer than 3 days! Essentially support cannot act on anything in a reasonable time frame. So if you do something and you want to stop it, it will take them at least a week and if the action is not reversible then it’s already too late to stop it from happening.

What this means is that I have forfeited my $2,200 for the latest month’s profit! Because the capital was withdrawn before the financial month was up. To me this was very suspicious because the capital was withdrawn only 1 or 2 days before the financial month was up. It’s like a pretext/excuse to rob me of my profits for the latest month. Ofcourse there is not way to prove that this was deliberate. I can’t help but wonder if the culture of delay is deliberate and has a purpose to get everyone used to having delays so that whenever a delay is financially in the favor of FXUnited they can profit passively this way. While $2,200 may not be a lot of money to FXUnited, if this happens on a regular basis to many people, it is reasonable to assume that all these “passive” ways of making money add up to a lot of money in the end. That is it might be possible that the delays are intentional to make millions when you accumulate all the incidences where it’s to their advantage to delay an action involving transactions weather it be the withdrawal of profits by clients or the withdrawing of capital that will lead to the withdrawal of profits by clients (directly or indirectly).

I also forfeited 2 lifetime CGATE accounts(because you can only withdraw your capital once per account)! And the support acted like as if it wasn’t their fault that circumstances is to blame. It kinda makes me feel like as if I was being “punished” for not having enough “faith” in this company.

Regardless I wanted their 11% per month opportunity and opened 2 more CGATE accounts leaving me with 2 dead accounts, 2 active accounts and 6 more accounts I can open in the future.